Assessment of the impact of hydroacoustics on aquatic biological resources 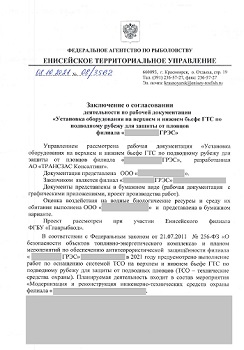 The diver detection systems of TRANSAS Consulting has been assesed on the impact on aquatic bioresources in accordance with Decree of the Government of the Russian Federation No. 380 dated April 29, 2013 "On Approval of the Regulations on Measures to Conserve Aquatic Biological Resources and Their Habitat".

The assesment was performed for a hydrorecirculation power plant (GRES) in the Krasnoyarsk Territory, where the M and K series of the diver detection system were installed on the upstream and downstream of the GRES.

For the assesment, the methodology specified in the order of the Federal Agency for Fishery dated May 6, 2020 N 238 was used, according to which the experts concluded that there was no negative impact on aquatic biological resources and their habitats.